Which one should you choose: Proxies vs Scraper API - ProxyScrape 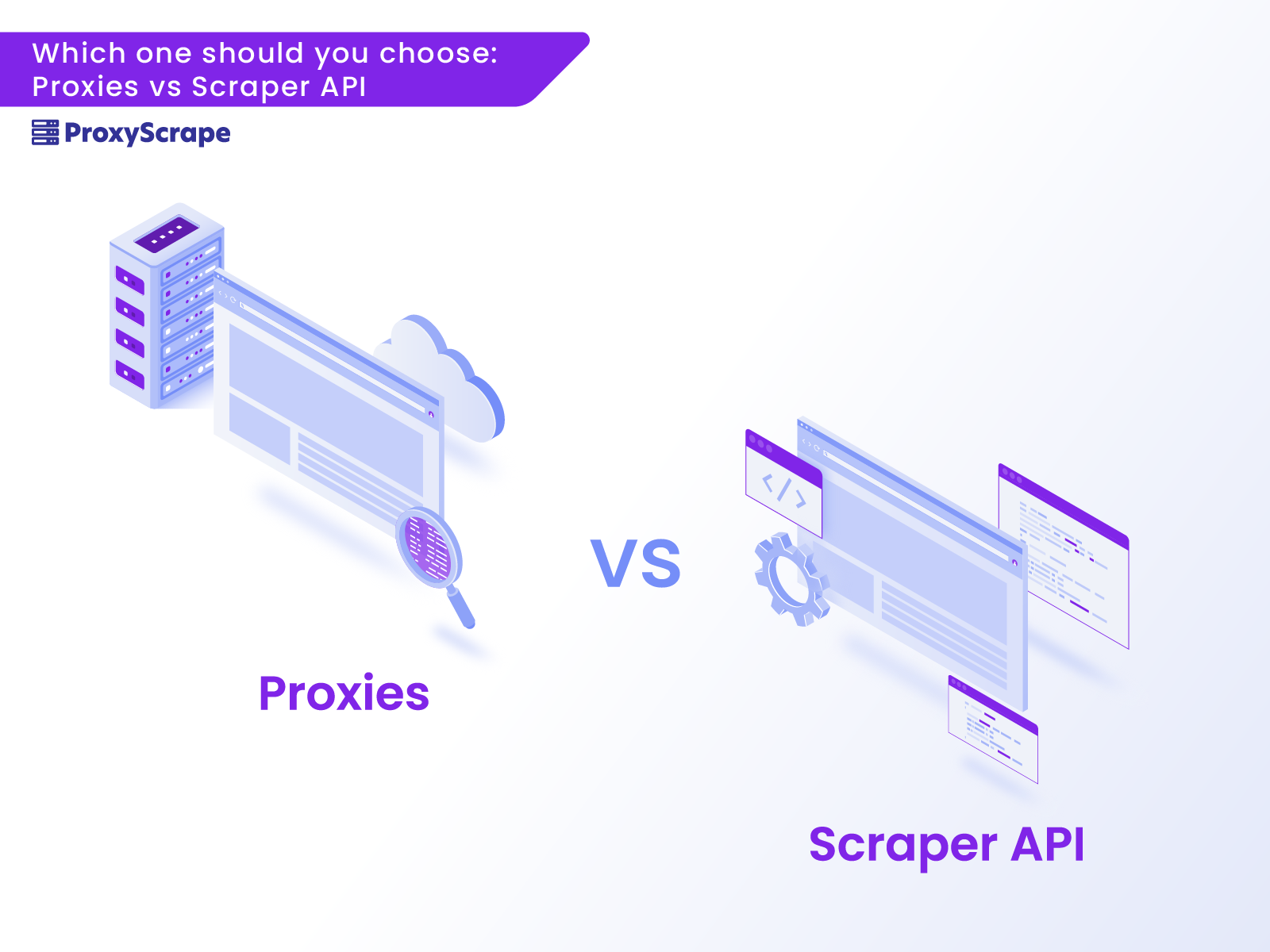 Web scraping has become a trend among data scientists in this era of big data, and there are plenty of websites that interest them. Due to this popularity for the past few years, many website owners have implemented security measures to block the scrapers’ IP addresses to minimize web scraping.

Why use proxies for web scraping?

You can either automate web scraping or perform it manually. The former is the most popular method, whereas the latter consumes a lot of time. When you have to scrape millions to trillions of data from websites, you have to send multiple requests to the target website from the same IP address. So the target website will most likely block you due to suspicious activity.

As a result, you will have to use proxies that mask your IP address, and you can find more about why you need proxies for web scraping here.

What is Scraper API and how does it work?

In simpler terms, API is an intermediary that allows one software to communicate with another. In other words, the APIs allow developers and other users with the target website’s essential system functions to extract its data from the outside world with obviously appropriate authentication methods. Many websites that offer products provide API to access their product data. You can also scrape data using scraper API. However, it works quite differently from typical web scraping.

You need to send the website URL that you need to scrape to the scraper API and your API key. API will then return HTML from the URL of the website, which you needed to scrape from. There is also a 2MB limit per request that you make.

How does Scraper API differ from web scraping?

Now you have a clear understanding of web scraping with proxies and what scrapper API is. So now is the time to compare the two with various circumstances, such as using scraper API  instead of web scraping and vice-versa. Stay tuned for that and let’s dive in.

When not to use Scraper API

Availability and lack of customization

Not all the target websites that you are planning to scrape will have an API. Even in situations where an API exists, it’s still not as easy as it sounds to extract data from it. This is because APIs do not provide access to all the data. Even if you could access the data, you have to deal with the rate limits mentioned in detail below.

Also, when there are data changes in websites, they will get updated in the API only months later. There is limited customization when you choose to scrape data over an API along with the availability issue. This implies that you have no control over the format, fields, frequency, structure, or other characteristics of the data.

As mentioned above, you have a rate limit when you use an API to scrape the data—this a primary concern for developers and other stakeholders involved with API scraping. The rate limit is based on the time between two consecutive queries, the number of simultaneous queries and the number of records returned per query.

The website’s API usually limits and restricts the data that you’ll be trying to scrape. Most websites also have a limited usage policy. If you wish to use the API for just a mere request, the rate limit would not be an issue at all. However, when you need to scrape a large magnitude of data, you”ll most likely be required to send tons of requests.

So then, you will be compelled to purchase the premium version of the API, as with the free edition, you will confront all the rate limits.

When to use scraper API

Now that you know when not to use API for scraping. Then you might be wondering why some users use it for web scraping? In this section, you will discover just that.

When you need to obtain data from a specific source for the same objective, using an API would be your ideal choice. When doing so, it would benefit you from having a contract with the website. So then you” ll be subjected to use the API with certain limits.

As a result, if your data needs are the same over a specific period, do use the API over any other method.

Scraping geo-restricted content – Some websites may impose restrictions on accessing their data from specific geographical locations. So you can easily overcome this restriction by connecting to a proxy server in a country closer to where the target website is located.

Overcome the IP blocking – When you send multiple requests to the target website from the same IP address, it is more likely to block you. So you would be able to use a pool of rotating proxies with different IP addresses, which would conceal your IP address.

Consistency – Unlike APIs with a rate limit, proxies help you send multiple requests to the target website consistently without getting blocked.

Regardless of which tool you”ll be using, web scraping will have some specific drawbacks:

Cost –Set up and maintenance of a proxy server can be pretty costly. If what you get from a website’s public API is sufficient, then an API would be more cost-effective than a proxy server.

Security- If a target website has any security measures such as a data protection mechanism, it would not be easy for you to extract the required data.

Website changes- When an HTML structure of a website changes regularly, your crawlers will break. So regardless of whether you are using web scraping software or your own code, you would have to ensure that the data collection pipelines are clean and operational.

Data from multiple sources- If you’re scraping from websites from various sources, web scraping might not generate the desired results as each target website has a different structure.

Which method is ideal for your business?

Smaller organizations with limited resources and staff will find it extremely difficult to build a scraper and then using proxies along with it. Therefore the ideal solution in such scenarios would be to use an API provided by the target websites.

Whereas for larger companies with in-house scraping infrastructure and resources, proxies with web scraping are a more viable solution.

We hope now you have learned the differences between web scraping using proxies vs. using a scraper API. Different methods require different resolutions. So we believe you will put into practice the essential concepts covered in this article to help you decide whether to use the scraper API or web scraping with proxies for web scraping.

By: proxyscrape Comments Off on Which one should you choose: Proxies vs Scraper API