How proxies are used for botting in Runescape - ProxyScrape 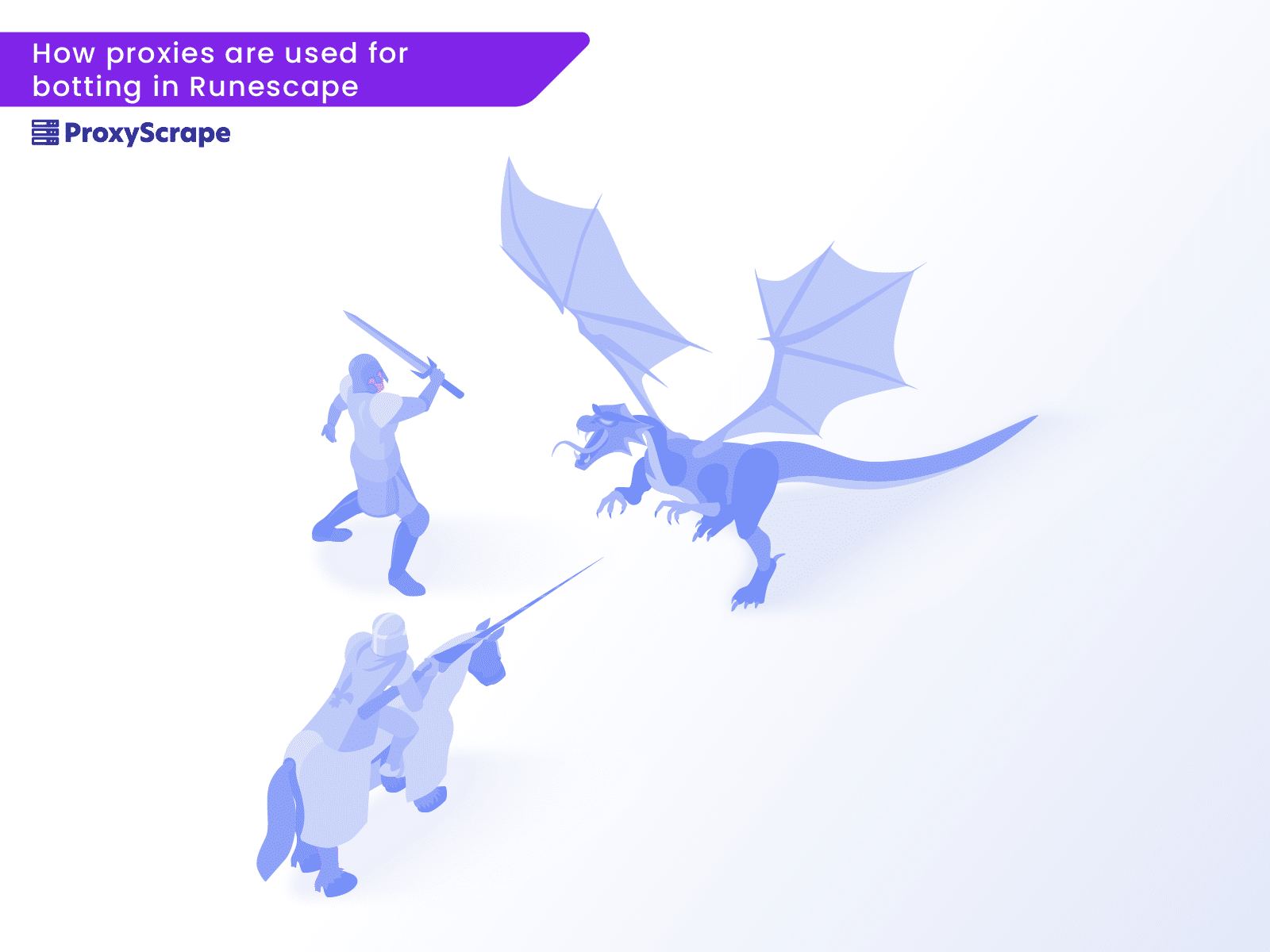 As you’re aware, most Runescape gamers use bots to automate the tasks to score more points, hoping to earn more money. However, utilizing multiple bots for the same account could lead to your IP getting blocked from the Jagex server. As a solution, the use of different types of proxies could help you to overcome such bans if you do it correctly.

So without further ado, let’s dive into it.

What is Runescape in a nutshell?

Jagex first developed the Runescape in August 2007. It is an MMORPG (massively-multiplayer online role-playing game) that millions of people across the globe enjoy playing. This is evident because currently, there are 250 million gaming accounts together with multiple spin-off games.

Its current version is Runescape3. However, in this article, we will be focusing on Old School Runescape (OSRS), which was released in

February 2013 and has since millions of players have been involved with it.

After paying a subscription fee, the players can play in legacy or regular modes and unlock more skills and kingdoms.

So we shall explore how bots and proxies would make your life easier with running OSRS.

Why do you need proxies for botting in Runescape?

Before looking into why you need proxies for Runescape, let’s look into what a proxy is in a nutshell.

A proxy acts as an intermediary between your computer and the server that you”ll be connecting to by masking your IP address. Your proxy server’s IP address will be visible to the Jagex server.

Due to Jagex’s strict measures against bots, almost all the players find it hard to compete with OSRS without using multiple accounts. OSRS often bans players from using bots and IP hopping, which uses a different IP address set for a single account one day and the next day using another set. Such bans are likely to occur even after growing your gold farm or developing other skills in OSRS.

It would help if you also kept in mind that most of the players’ accounts get banned due to operating multiple accounts from a single node or a computer. Therefore you need proxies to make you appear to Jagex as two different users when you use the other bot from the account that does not contain a proxy.

You could also use proxies with an anti-ban-oriented bot like a dream bot to function your multiple accounts.

Other benefits of proxies in botting

Proxies also have other benefits aside from helping you to maintain multiple accounts. Such benefits include allowing you to be anonymous throughout a game and protecting your personal and financial details from getting hacked by fellow team players, cybercriminals, and hackers, which often occurs when you are connected through a public Wi-Fi network.

Dreamboat is one of the larger OSRS bots that Jagex is not likely to block. It can function along with Powerbot, TriBot, and OSBot. It is the most user-friendly bot currently available, and you can easily install it on Mac, Windows, or Linux in just under 3 minutes. It can play OSRS for you automatically with fewer setups. You can find further information on its official page.

What Proxies should you use for Dreamboat?

It would be best if you used socks5 proxy. In a nutshell, socks5 proxy creates a Transmission Control Protocol (TCP) connection to a server behind a firewall on behalf of the client’s device and exchanges the packets between the client and the server. You can find out further on socks5 proxies in this article.

The Socks5 proxy that you’re using should be a private proxy indeed. This is because if you use a public proxy, there is a high probability that other fellow gamers would be using the same public proxy. Then two or more gamers would likely end up with the same IP address. Therefore you’re more likely to get a ban when using public proxies.

In contrast, when you use private proxies, they’re password protected. Furthermore, you”ll be the only one using that unique IP address when using private proxies.

Another vital aspect to keep in mind when using proxies is not to use multiple accounts with a single proxy. It is because the whole concept of using proxies is the ability for your farm to run on multiple IP addresses. So if one account gets banned, you don’t risk the other accounts getting banned as well when they’re not linked to each other.

Now you are aware that you need private socks5 proxies for botting in Runescape. Then it would be best if you decided whether to use a residential or datacenter socks5 private proxy. While you can find more details about the differences between residential and data center proxies here, residential proxies are preferred for Runescape botting.

If you’re also playing the game on a mobile device, mobile proxies would be the ideal choice as, just like residential proxies, the IP addresses of mobile devices trace back to mobile owners.

We hope that you enjoyed reading this article and learned the fundamentals of botting for Runescape with proxies. Proxies would allow your chances of succeeding in the Runescape game at the highest level, provided that you follow the guidelines mentioned in this article.

We also hope that if you’re a gamer, you will achieve success by putting into practice all the key points mentioned in this article.

By: proxyscrape Comments Off on How proxies are used for botting in Runescape