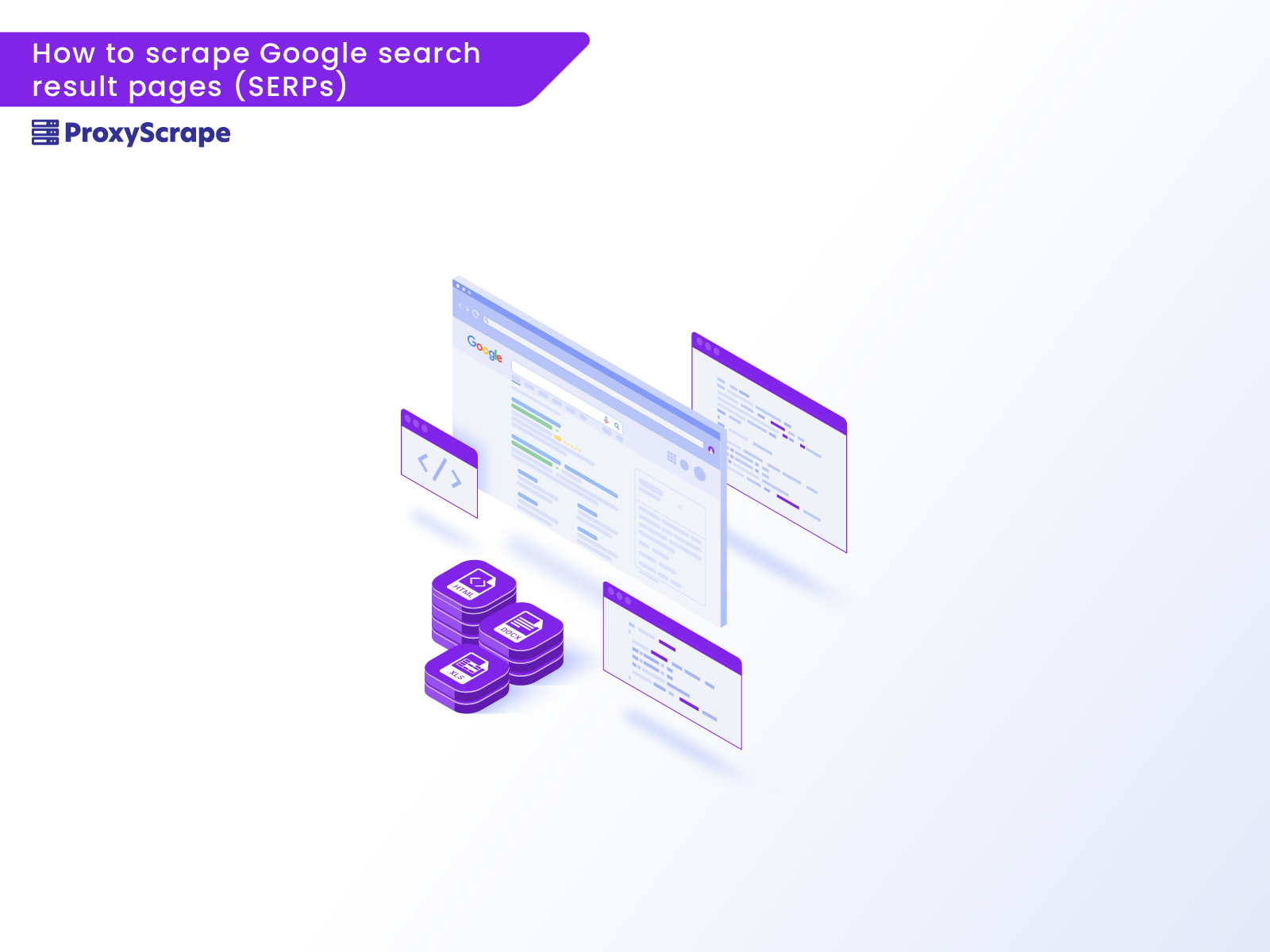 It needs no introduction that Google is the widely used platform for search-related queries of people across the globe. According to the Statista website, Google’s share of the global search market is 87.35%. Further, the stats have shown that Google exceeds 2 trillion users annually, indexing over 130 trillion pages.

These statistics prove that Google has comprehensive publicly available data on their SERPs, valuable to internet marketers and others alike. So scraping SERPs has become a priority among Internet marketers. However, when you exceed a certain amount of requests, Google will block your IP address.

So this article will dive into how to scrape SERPs without getting blocked. Before that, we will cover the basics of web scraping.

What is web scraping?

Let’s assume that you need to copy a large set of data from several web pages. At first, you might be tempted to copy and paste the content into a spreadsheet. However, since it is a large web document, manually extracting data would be time-consuming. Hence you would need to automate the scraping process, which would save you ample time.

This automation process of scraping data is known as web scraping. With this method, you can download the HTML source without entering the website URL in a browser.

You can read to find further information about web scraping here.

What is a Search Engine Results Pages(SERP) scraping?

Just like web scraping, scraping SERP is the process of extracting the top 10 or beyond results from a Google search for a series of keywords. Most Search Engine Optimization (SEO) companies employ this technique to track the rankings of their client’s websites for the targeted keywords.

There can also be other reasons to perform scraping for SERPS, such as ad verification, lead generation, and content aggregation.

Usually, there are automation tools to carry out scraping for SERPs, which you will find out in upcoming sections of this article. Alternatively, you can create your own script using programming languages such as Python. However, you may do so if you’re only confident in coding and have higher technical expertise. In addition, you can use the cURL as well to scrape Google SERPs.

Once these tools scrape data from relevant web pages, they save them for Databases, CSV files, XML, or JSON files. Then these data are in a structured format where you would be able to determine if your SEO efforts are working correctly. This is because you can see your page’s placements over time.

In the next section, you will discover a significant benefit of scraping from  SERPs.

How scraping SERPs helps you recover damage caused by hackers?

Being hacked is something that always affects you negatively. Your hacked website and its login credentials may end up on the dark web. Hackers could even sell backlinks or run dark web malware on your site. Likewise, hacking has a negative impact on the context of SEO as well.

One of the significant benefits of scraping SERPs in Google is its ability to identify the potential damages that the hackers would cause. When you have worked hard to achieve your SEO rankings on SERPs, hackers can easily infiltrate your security settings and mess up all your SEO efforts.

You can find comprehensive details on how hackers hijack your SEO efforts here.

According to a survey, 48% of SEO professionals stated that it took Google many months to recover the original state of their SERFs results.

Tracking the SERPs for your websites provides helpful acumen about what is happening with your rankings. They also help you to determine the potential outcomes of your rankings during the hacked attempts. Therefore you could quickly request Google to restore to your previous rankings. As a result, the downtime of your site and drops in search engines ranking would be minimized drastically.

On the other hand, when your website is infected with Malware, it would handicap your search engine rankings. Your site would have a greater probability of getting blacklisted as well. According to Godaddy, this is more so for small business websites. 90% of the Godaddy sites did not know that Malware had infected them.

So continuously scraping all your SERPs enables you to spot potential hacking attempts in advance and certainly helps Google restore your results.

How to scrape Google search results?

This is a general web scraper tool that you can use for scraping Google SERPs. It not only scrapes SERPs but is also good at scraping data from Google maps.

One of the critical features of Octoparse is that it cleverly avoids anti-scraping measures put forward by target websites. Also, it doesn’t require you to be a programmer to use its visual scraping tool. It is pretty convenient to use and available as a cloud-based solution as well as installable software.

You can find further information about Octoparse here.

Webscraper.io is a free extension for the Google Chrome web browser. It can extract data from Google web pages in the form of HTML and CSS. It can then export data in CSV format. The browser extension version is entirely free, and it is sufficient to manage your scraping activities. If you go for the cloud-based option, it will incur a cost.

You could also extract Google maps with it and convert them into a Database. You can find more information about this extension here.

Did you know that Google provides an official way to extract data from its search engine? Although it has its limitations, as mentioned below, it’s currently available for anyone who requires the SERP data. Here are its limitations:

So with its limitations and costs, Google search API is not the ideal platform for scraping SERPs results. It’s always better to take the alternative methods mentioned throughout this article.

For those of you who are experts in coding with Python, this method would be handy. It would undoubtedly reduce the cost in the first place, and you have more control.

In this program, we will extract the SERPs for the search query, “How to learn Python.” To make things simpler, we would hardcode the search query. Then after pulling the result set, we will print the title of the results. Let’s dive in.

Here I will explain each line of code clearly:

Then the following line is self-explanatory, which loads the BeautifulSoup library. This library makes it possible to parse HTML and XML documents.

This piece of code sets the URL of the search engine from which to scrape the data. So I have set the URL as google.com, and for the search query, I have appended the text in the text variable,’ How to learn Python programming’ as the search query.

Then the above code sets the user agent string.

The above code sends the request to the webserver to download the requested HTML content of the search results.

Create an instance of BeautifulSoup with the data that the above code requested from ‘lxml’ parsing headers. You must first install the ‘lxml’ package for the above code to work.

Then using a for loop, all the h3 tags are extracted to display the titles.

As mentioned earlier, search engines such as Google impose restrictions including banning your IP address when you exceed the scraping limit. This is where proxies play a crucial role in masking your IP address. Out of all the proxies out there, residential proxies are the ideal choice. This is because their IPs originate from real residential owners.

However, when you scrape the first few SERPs, Google will notice that your actions are inhuman. Then it would block your proxy’s IP address, and you would have to deal with captchas.

For a detailed explanation of residential proxies, please refer to this article.

By now, you should have a clear idea of what Residential proxies are and how they can help you to overcome the IP bans. Now we would look into a crucial factor that many users neglect when scraping from Google’s SERPs. That is the legal implications of using residential proxies.

First of all, it is legal to use residential proxies to scrape Google SERPs. So with that in mind, you might be tempted to send unlimited requests to search engines such as Google. As such, it would overload Google’s servers with a vast number of requests. This is not the right thing to do, even according to the Google SERPs algorithm.

You must immediately limit the requests or stop the scraping process if you or your proxy provider receives a complaint from the target webserver. The complaint can be that the target web server might be experiencing a high workload due to your unlimited requests. Therefore you need to be cautious of such facts.

Is it illegal to scrape from Google?

Usually, Google doesn’t like when scrapers scrape data from it. As I have stated numerous times in this article, it can ban your IP addresses. Also, up to date, Google has not taken any action for over scraping the data. Obviously, the SEO companies would not have an exit if Google took such actions.

Now we hope you have gained an overall knowledge of the different methods that web scrapers used to scrape data from SERPs.Different circumstances employ different methods. Finally, you have learned how you could use residential proxies for scraping SERPs along with their legal implications.

We hope that you find this article useful, and stay tuned for more articles.