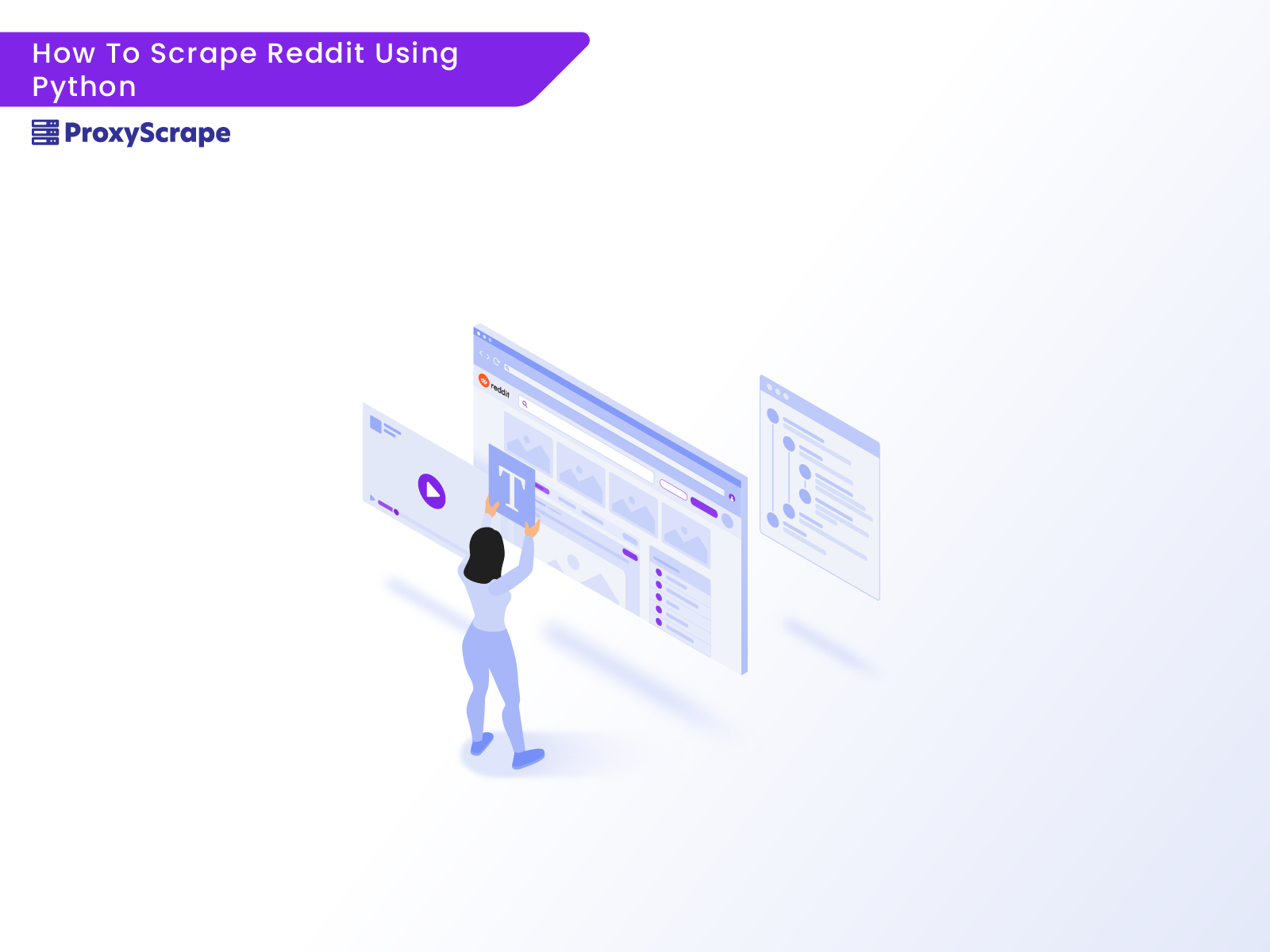 People can easily gather and scrape information from multiple sources such as Facebook, Reddit, and Twitter. You can think of a scraper as a specialized tool that extracts data from a web page accurately and quickly. The scraping APIs help the scrapers avoid getting banned by anti-scraping techniques that the websites place. However, it is expensive to use APIs as compared to a proxy tool managed by yourself.

Have you used Reddit? If you are a social researcher and spend a lot of time online, chances are you’ve heard of Reddit. Reddit bills itself as the “front page of the Internet.” It is an online discussion forum where people share content and news or comment on other people’s posts. So, it is an incredible source of data for Internet marketers and social researchers.

Reddit has an API called the Python Reddit API Wrapper, shortened for PRAW, to crawl data. In this blog, I will be showing you steps on how to scrape Reddit using python. But before that, you need to know why you have to scrape Reddit.

If we talk about the design of Reddit, then it is broken into several communities known as “subreddits.” You can find any subreddit of your topic of interest on the Internet. The social researchers run analysis, make inferences, and implement actionable plans when they extract Reddit discussions for a particular topic.

You can scrape a lot of data points from Reddit, such as:

You can scrape any information from Reddit relevant to your business because of the following needs:

To have a hitch-free scraping session, you will have to evade the anti-scraping systems put in place by Reddit. The most common anti-scraping techniques used by Reddit are:

There are five ways to scrape Reddit, and they are:

Let’s see how we can scrape Reddit using the Reddit API with the help of the following steps.

First, we will import Pandas built-in modules i-e., datetime, and two third-party modules, PRAW and Pandas, as shown below:

You can access the Reddit data using Praw, which stands for Python Reddit API Wrapper. First, you need to connect to Reddit by calling the  praw.Reddit function and storing it in a variable. Afterward, you have to pass the following arguments to the function.

Now, you can get the subreddit of your choice. So, call the .subreddit instance from reddit (variable), and pass the name of the subreddit you want to access. For example, you can use the r/Nootropics subreddit.

Each subreddit has the below five different ways to organize the topics created by Redditors:

You can grab the most up-voted topics as:

You will get a list-like object having the top 100 submissions in r/Nootropics. However, Reddit’s request limit is 1000, so you can control the sample size by passing a limit to .top as:

You can scrape any data you want. However, we will be scraping the below information about the topics:

We will do this by storing our data in a dictionary and then using a for loop as shown below.

Now, we can scrape the data from the Reddit API. We will append the information to our dictionary by iterating through our top_subreddit object.

Now, we put our data into Pandas Dataframes as Python dictionaries are not easy to read.

It is very easy to create data files in various formats in Pandas, so we use the following lines of code to export our data to a CSV file.

You know that Reddit is not much of a strict website when it comes to proxy usage restrictions. But you can be caught and penalized if you automate your actions on Reddit without using proxies.

So, let’s look at some of the best proxies for Reddit that fall into two categories:

Residential Proxies –  These are the IP addresses that the Internet Service Provider (ISP) assigns to a device in a particular physical location. These proxies reveal the device’s actual location that the user uses to log in to a website.

Datacenter proxies – These are various IP addresses that do not originate from any Internet Service Provider. We acquire them from a cloud service provider.

Following are some of the top residential and datacenter proxies for Reddit.

Smartproxy is one of the top premium residential proxy providers as it is effective for Reddit automation. It has an extensive IP pool and provides access to all IPs once you subscribe to its service.

The pricing and unlimited bandwidth of Stormproxies make them a good choice. They are affordable and cheap to use. They have proxies for various use cases and provide the best residential proxies for Reddit automation.

ProxyScrape provides three types of services to its users i-e.,

Highproxies work with Reddit and have the following categories of proxies:

You can also use Instantproxies for Reddit automation as they are very secure, reliable, fast, and have an uptime of about 99.9 percent. They are the cheapest of all datacenter proxies.

You need proxies when you are working with some automatic tools on Reddit. It’s because Reddit is a very sensitive website that easily detects automatic actions and blocks your IP from accessing the platform.  So, if you are automating some of the tasks like votes, posts, joining/unjoining groups, and managing more than one account, you definitely need to use proxies to avoid bad outcomes.

So, let’s look at some of the best Reddit scrapers as the best solution to scrape large amounts of Reddit data.

Scrapestorm is one of the best scraping tools available in the market as it works pretty great when it comes to scraping Reddit. It makes use of artificial intelligence to identify the key data points on the webpage automatically.

Apify’s Reddit scraper makes it easy for you to extract data without using the Reddit API. It means that you don’t need a developer API token and authorization from Reddit to download the data for commercial use. You can also optimize your scraping by using the integrated proxy service of the Apify platform.

We discussed five ways to scrape Reddit data, and the easiest one is to use Reddit API because it only requires basic coding skills. PRAW is a Python wrapper for the Reddit API that enables you to use a Reddit API with a clean Python interface. But when you have large Reddit scraping requirements, you can extract publicly available data from the Reddit website with the help of Reddit scrapers. To automate your actions on the Reddit website, you need to use a datacenter or residential proxies.

Use Headless Browsers and Proxies to Scrape any Website

How To Scrape Google Using Python

How to Bypass the Great Firewall in China