How to avoid Proxy/VPN exit ban for 4chan - ProxyScrape 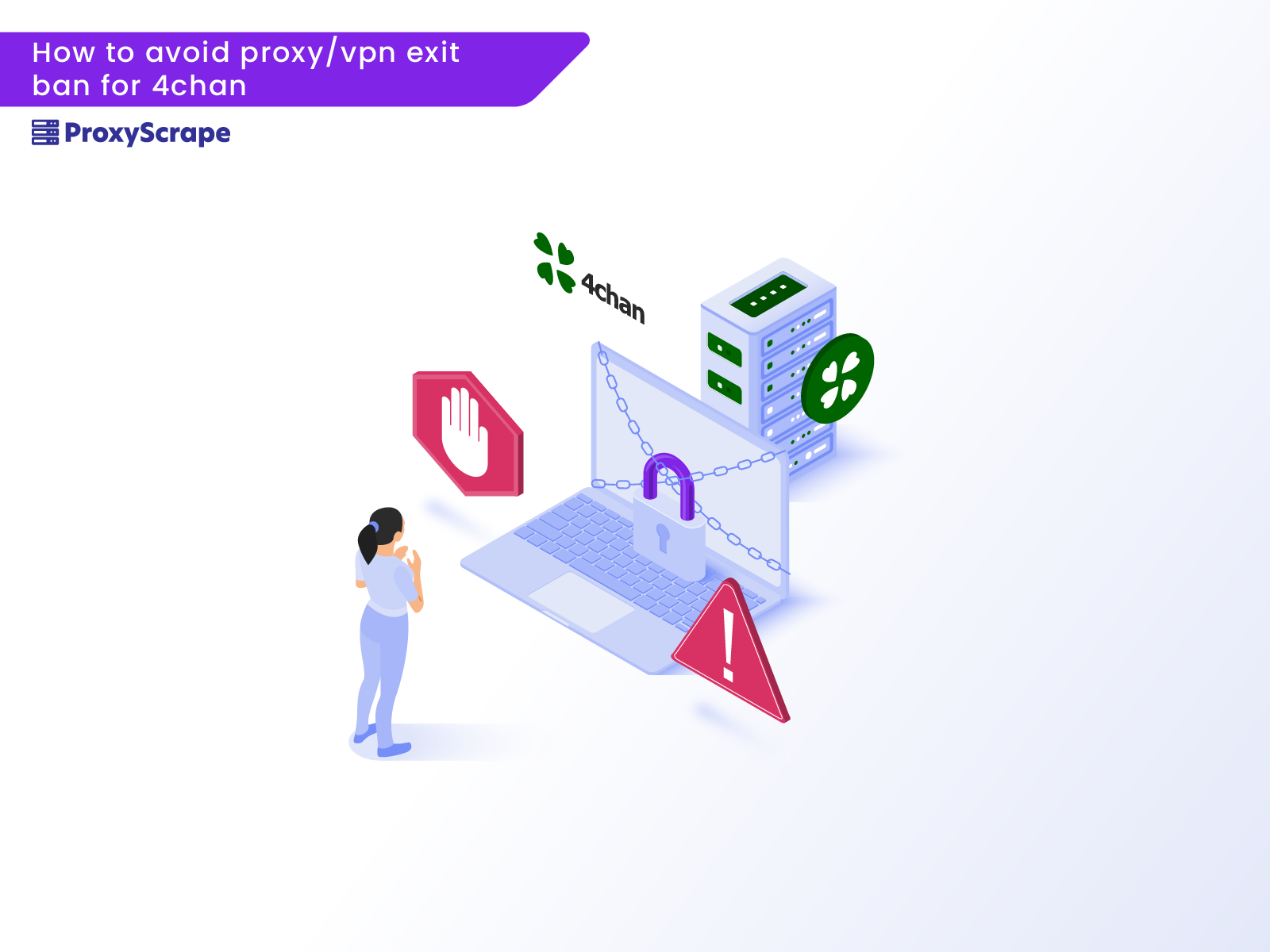 The proxy/VPN exit ban on 4Chan may sound familiar to all those who use it. If you’re a regular 4Chan user falling into that category, this article is here to help you.

So in this article, you will find out how to bypass Proxy/VPN Exit Node in some unique ways. But before that, first things first, as most of you might be interested to know a thing or two about 4Chan briefly.

4Chan is an image-based social platform where users can post, view, and discuss a broad range of topics ranging from Japanese animations and culture to video games, music, technology, adult content, and much more. With 219,691 users, with the majority being young college-educated men vastly from English-speaking countries such as the USA, UK, Canada, Australia, you can do all the activities by being anonymous without requiring any registration.

So when it provides such a higher level of anonymity, you may incline to think that it is genuinely a free environment in which you could behave as you please. However, this is unlike reality, and in the next section, you will find out why.

When does the Proxy/VPN exit ban occur?

While most of these bans are due to bad behavior, other bans might be deemed unfair. So you might be wondering why they’re considered to be unfair?

Alternatively, you may live in a country such as Australia or New Zealand, whose ISPs ban accessing 4Chan.

The good news is that you can bypass the Proxy/VPN Exit Node ban by using a Proxy, VPN, and some other simple methods such as switching off your modem and restarting it. You could also request your ISP to change your IP address if you have a dynamic IP address.

In this article though, we will look at overcoming the ban with VPNs and Proxies.

When you use a VPN to connect to the Internet, it routes all your traffic through a highly encrypted tunnel and assigns you a new temporary IP address throughout the session that you’re connected to it. This way, your actual IP address is hidden, and thus the 4Chan website sees the IP address of the VPN server instead of yours.

Having said that, you need to be cautious that some VPN servers will not work if 4Chan has blocked the IP address of the VPN server. Also, in certain countries, you can not connect to 4Chan as they have banned it. Due to these facts, you will have to experiment with several VPNs until you discover the right one.

This whole process of experimenting may sound depressing, but you mustn’t give up easily as 4Chan can’t block all VPN IP addresses. Also, the VPN apps keep on adding new IP addresses as well.

Now let’s look at how you can use a VPN to unblock the 4Chan ban:

Unblocking the 4Chan block with VPN may not be a 100% viable option. This is primarily because you have to keep connecting to heaps of VPN servers before you reach the appropriate one. In addition, you have to consider the following factors when choosing a VPN:

Now you have a fair understanding of the usage of VPNs for avoiding 4Chan blocks. Now let’s take a look at how proxies could help.

How proxies can help with bypassing the 4Chan ban

Proxies act as an intermediary between your computer and the web server you’re connecting to by masking your IP address. When connecting to 4Chan with proxies, we don’t recommend using free private proxies. This is because, with free proxies, your IP address will be shared with other users. So if 4Chan blacklists such a free proxy IP, you will also be banned.

Another vital point worth mentioning with free proxies is that they can cause your data to be stolen as they do not guarantee any data protection.

ProxyScrape can help you with your residential proxy needs.

4Chan is one of the largest image-based entertaining websites; you should use it with caution when posting, sharing, and commenting on posts. This would help you stay away from having a ban.

However, if you’re blocked for unfair reasons, you have the choice of using a VPN or Proxy. I firmly believe that the tips mentioned in this article would be beneficial for you.

By: proxyscrape Comments Off on How to avoid Proxy/VPN exit ban for 4chan